You are viewing a previous version of KrakenD Enterprise Edition (v1.3) , go to the latest version 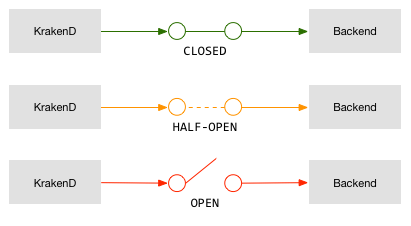 To keep KrakenD responsive and resilient, we added a Circuit Breaker middleware on several processing pipe points. Thanks to this component, when KrakenD demands more throughput than your actual API stack can deliver properly, the Circuit Breaker mechanism will detect the failures and prevent stressing your servers by not sending requests that are likely to fail. It is also useful for dealing with network and other communication problems by preventing too many requests to fail due to timeouts, etc.

The Circuit Breaker is a straightforward state machine in the middle of the request and response that monitors all your backend failures. When they reach a configured threshold, the circuit breaker will prevent sending more traffic to the suffering backend.

The Circuit Breaker is a protection measure for your stack and avoids cascading failures.

The Circuit Breaker is available by default in KrakenD thanks to the circuit breaker middleware. As with all additional middlewares, you need to set its values in its own namespace github.com/devopsfaith/krakend-circuitbreaker/gobreaker inside the extra_config key.

The following configuration is an example of how to add circuit breaker capabilities to a backend:

The attributes available for the configuration are:

The Circuit Breaker retains the state of the connections to your backend (s) over a series of requests and when it sees more than the configured number of consecutive failures (maxErrors) in a given time interval (interval) it stops all the interaction with the backend for the next N seconds (the timeout). After waiting for this time window, the system will allow a single connection to trial the system again: if it fails, it will wait N seconds more, and if it succeeds, it will return to the normal state, and the system is considered healthy.

The circuit breaker works with three different internal states, and the easiest way to imagine it is like in an electrical circuit:

And this is the way the states change: